Unity of Flagstaff (UoF) is a small community church that had been performing services out of a small office suite within a retail strip mall. UoF owned 5 acres of property on N. Highway 89 and contacted smithARCHITECTS (sA) to design a new facility on this property that would accommodate their growing congregation. The property offered beautiful, unobstructed views of Mt. Elden and the San Francisco Peaks but, unfortunately, is also exposed to strong prevailing winds from the southwest. sA organized the building design to respond to these two factors. The main auditorium/sanctuary was designed to perfectly align with the San Francisco Peaks and multiple windows provide expansive views for the congregation. The building is organized into a modified “U” shape around a central outdoor courtyard that is sheltered from the prevailing winds by the building itself. This central courtyard not only functions as an outdoor gathering space, but it also allows natural daylight to enter into the main circulation areas that surround the courtyard.

Loven Contracting was selected to be the general contractor and immediately became an integral part of the team. It became apparent that the construction budget would not support the construction of the entire facility, so sA and Loven developed a phased approach that would allow UoF to build a smaller portion of the facility until additional funds became available. 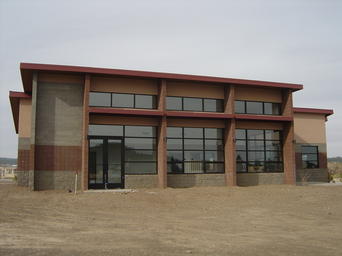